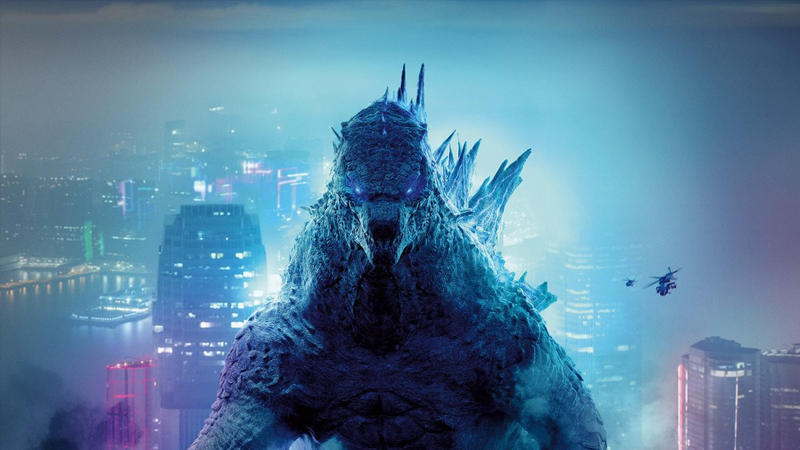 I probably have an unhealthy obsession with Godzilla. If you follow me on Facebook, you may have seen entries in my once-in-a-while photo album called “The Everyday Godzilla Collection ™” (it’s not really trademarked, of course; that just seemed funnier). Basically, I doctor photos taken by me or a friend/family member and add Godzilla (strictly the American movie version from Legendary, in case you were wondering). Well, I recently shared one of my photoshopped Godzilla pics with a Facebook group for the Monsterverse, and in a day it got 200+ likes and several requests for me to photoshop Godzilla into other images. I’m thinking of this as a highly lucrative new career option.

Anyway, here’s my take on Godzilla arriving at Toronto:

So you won’t be surprised to learn that I’ve seen this year’s top grossing US-made film, Godzilla vs. Kong, about seven times (and counting; I’m planning to get a copy soon). Yes, I realize that me seeing this film so many times contributed to its box office status, so that’s a little self congratulatory. I digress.

But the guy in the photo below? True story: That guy showed up to a movie set one day thinking he was going to help train some actors with motion capture, but instead they turned to him and said, “You’re Godzilla.” Some guys have all the luck.

His name is TJ Storm, meaning that he has both a cool job AND a cool name. And if you aren’t a huge Godzilla fan (I’ll try to forgive you), he also has done mo-cap work in the Marvel Cinematic Universe as Iron Man, Groot, and Rocket Racoon.

If you want to find out a little more about TJ Storm and what it’s like to be the motion capture actor for big name roles, check out this article: https://www.syfy.com/syfywire/genre-mvp-the-motion-capture-actor-whos-played-groot-godzilla-and-iron-man

And if you care to see my entire ever-evolving collection of personally photoshopped Godzilla images, they can be found at my Facebook page, here: https://www.facebook.com/media/set/?vanity=KeithSoaresAuthor&set=a.1444717255596313

I’m such a kaiju fan that I’ve even created a few of my own. Their names are Gorgol Alpha, Gorgol Omicron, Gorgol Sigma, and Gorgol Tau, and you can find them in my John Black series of books. Here’s a conceptual look at Gorgol Alpha:

In fact, that’s Gorgol Alpha who appears on the cover of John Black book 2, And It Arose From the Deepest Black.