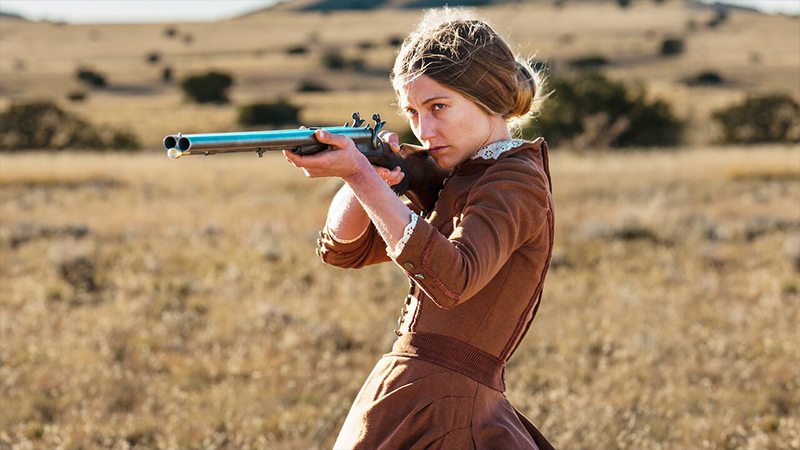 There is a duality to being alone. It means freedom to do anything within your power, yet it also means you are limited by your powers alone. It means there’s no one to tell you what to do and no one to help you if you need help. Being alone can be liberating. It can also be terrifying.

“The Wind,” an impressive debut feature film by director Emma Tammi, stars Caitlin Gerard as the central character, Lizzy. There are other actors in the film – a slight few – but really, this is a movie about Lizzy alone.

Be forewarned. The proceedings take a while to grasp because the film is intentionally showing only what you need to know, or, more likely, what Lizzy remembers, in a disjointed order. In truth, because I wasn’t familiar with any of the actors prior to this film, it took me a little time to figure out who was who, especially when the scenes cut dramatically and seemingly at random.

Stylistically, the story is a mashup of the horror and western genres, with Lizzy and her husband, Isaac, living in a remote prairie location, probably set in 19th century Midwestern America. This is the kind of movie that never truly clarifies such details. In fact, many things are left without clarity, but there are enough clues as you sweep through Lizzy’s memories that you can come up with your own take on what you’ve witnessed by the end of it all.

The catalyst that sets things in motion is the arrival of a second couple who take up residence in a nearby abandoned cabin. These newcomers, Emma and Gideon, seem ill-fitted for life on the plains. Gideon in particular needs a lot of help from Isaac right from the start, creating a slow-brewing tension between the characters and their multiple crossed pathways. Are the men a good paring, working together? Or, for that matter, are the women?

With the viewpoint tightly focused on Lizzy at all times, she can appear alone even when other characters are right next to her. However, as the tensions and scenes play out, we soon discover that Lizzy’s point of view is unreliable, and her own memories sometimes don’t gel with one another. There’s an explanation to all these goings on, but the screenwriter, Teresa Sutherland, and director deftly opt to let things simmer. Scenes start and end without warning, and the viewer is left to connect the dots.

Note: I don’t think my comments below are spoilers, as I have opted to tell as little as possible, but if you want to go into this film blind, skip the rest of this review. This is the kind of film where knowing nothing ahead of time will increase your confusion but may increase your enjoyment.

Everything is upended when Emma dies violently. This tragic event causes Lizzy to be left on her own for a few days – and nights – and while she is well and truly alone, things become even more perplexing. There are wolves and winds and night terrors and a fever, at least by Lizzy’s recollection. Seeing this lonely prairie life through Lizzy’s lens, we have to wonder if what we’re being shown is what happened, or what Lizzy believes happened. Even with the best intentions – and those aren’t always on display here – a person’s recollections can drastically disagree with reality.

Eventually, Lizzy’s alone time is interrupted by the arrival of another character, a traveling reverend, but even then, the tight focus on Lizzy, her point of view and her perceptions, makes it hard to know what is truth.

Watching this film, I couldn’t help but imagine what it might be like to live in such a remote and potentially inhospitable place all by myself. I can see why Lizzy keeps her side-by-side shotgun near at hand, and why she’s so familiar with how to use it. It is, as she clearly states, her gun.

The final moments of “The Wind” wrap up its tale in probably the only way possible. The way foreshadowed from the beginning and from the very essence of its style and cinematography. When Lizzy finds herself once more alone, is she liberated, or is she terrified? The film lets you decide.

This is the first movie review I’ve done, and I plan to continue adding reviews at random intervals in the future. They won’t necessarily be for the latest films, but rather things that I come across of interest. Many will be horror, though I will also review sci fi and fantasy as possible. Generally, I only plan to post a review when a movie has some merit, though if I come across something particularly awful, I may feel obligated to discuss that, too. Hope you enjoy my take on these films.