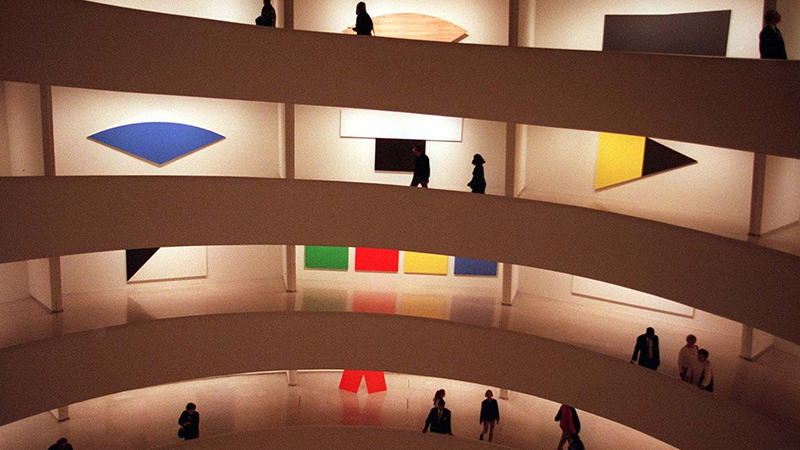 I’m not a big fan of Ellsworth Kelly.

Wait, I should rephrase that.

I’m not a big fan of the art of Ellsworth Kelly.

Hm. Maybe I should rephrase that, too.

I seriously dislike the art of Ellsworth Kelly.

But I have a reason. Many years ago, my wife and I were in New York City and we stopped into the Guggenheim. We both love modern art, so this is not simply a matter of not “getting” his art. I get it. I just think it’s lame. My wife and I took the elevator up so we could stand at the top of the big spiral walkway that is the heart of the Guggenheim, and all we saw was red circle, blue square, green triangle, yellow rectangle, another red circle, etc., etc. All the way to the bottom. Not living in NYC, we knew it might be a while until we’d go back, so to see this display — all Ellsworth Kelly — was disappointing.

And so, not surprisingly, it has become a thing for us. If we see a red circle, we ask, “Oh, is that an Ellsworth Kelly? It’s lovely.” This doesn’t come up often, but it is so ingrained in our minds that no reminder is necessary. Which is why, when my wife texted me a photo of several colored boxes on top of each other, from a Detroit art museum she was visiting this week, I immediately responded. “No. No Ellsworth Kelly allowed.” Her response was simply “HA.”

Of course it was him. And now, with inquisitive kids, they want to know, “What’s so funny?” So, as a parent, you try to explain. That Kelly is a famous artist, appears in many galleries and museums, and that we just don’t get it. Usually when something in art is famous and you can’t figure out why, the reason is just that they were first. Was Ellsworth Kelly the first person to paint an all-red circle or an all-green square? Maybe, but the bar there seems so low that it’s hard to give credit to such a simple thing no matter if that’s true or not.

In fact, Ellsworth Kelly’s art is so obviously mock-able, that Stephen Colbert once had Steve Martin (an art-lover as well as comedian) try to guess which of two green squares was an Ellsworth Kelly and which was a paint swatch. He failed.

So when my daughter asked about Ellsworth Kelly and why it was so funny, I had to google some images for her, show her the art in question. And on my way there I discovered something unexpected. Ellsworth Kelly wasn’t just an artist, he was also a veteran. In fact, he was a part of the famous Ghost Army, a unit of the US Army in World War II whose role was not to fight, but to pretend to be other units in order to deceive the enemy.

They used recorded sounds and theatrical effects to make people believe that a real army unit was passing by. They faked radio transmissions. They even had inflatable tanks to impersonate the real thing.

And so there I was, seconds after mocking Ellsworth Kelly, realizing that I respected him. That was unexpected.

Which is why you should always be careful: Anyone could have a ghost army.