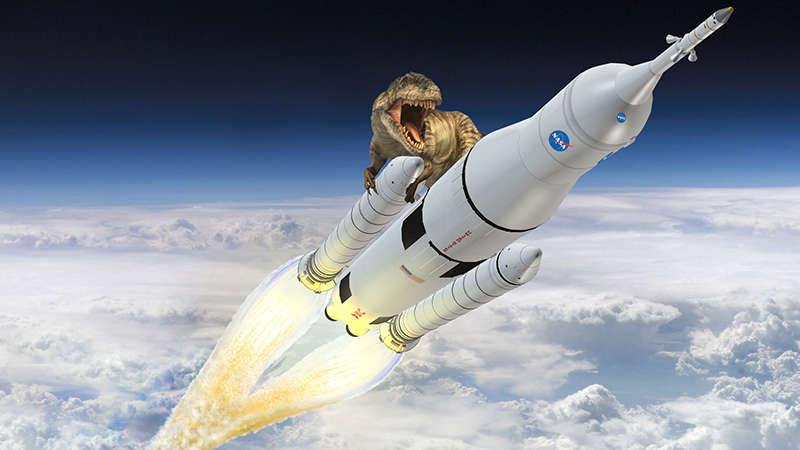 In recent months, I’ve been fascinated by two science stories: the EmDrive, a propellant-less space thruster, and the discovery and confirmation of preserved soft tissue from a Tyrannosaurs rex.

The first story conjures up images of a new age in space flight. The technology could already be strong enough to power satellites. In the future, it could mean continuous acceleration for interplanetary missions.

The second harkens back to Jurassic Park and makes me wonder if one day, even in my own lifetime, someone will announce they’ve made a living, breathing dinosaur. Though such an idea is fraught with moral complications, think of the amazing scientific insight it might provide (assuming of course that said dinosaurs were not housed in a shoddy amusement park structure in the path of a major tropical storm).

But what I really found interesting about these stories is their comparatively similar freshness and reactions.

The EmDrive, from the mind of British engineer Roger Shawyer, was first publicly announced in the September 2006 issue of New Scientist. Meanwhile, paleontologist Mary Schweitzer was responsible for the discovery of the T-rex soft tissue… in 2005.

And in both cases, these finds were considered “highly controversial” (EmDrive, T-rex). In fact, many people, many scientists responded to both issues with utter disbelief.

I understand that. Scientists are people who, by definition, want proof, want explanations, want verification. And so it makes perfect sense that independent confirmation is needed in these cases, and others.

But what I don’t like about these scenarios is the apparent closed-minded nature of the overarching scientific community. To me, and this is of course an outsider looking in, it feels as if the community grows too comfortable with its current state, and that disruption is not only frowned upon, it can be ridiculed and spark hostility.

Thankfully, that’s not how everyone reacts. There are folks out there willing to listen to new (potential) discoveries, to test them, and to try to confirm. In the case of the EmDrive, a Chinese group did that in 2008, and still the community at large shunned the results. Only this year, when NASA has confirmed similar results, is the EmDrive beginning to get serious consideration. For the T-rex soft tissue, it wasn’t until last year that there was a public announcement to possibly explain how this tissue could survive: iron in the body, degrading over time, acts like a preservative.

What I find truly interesting is the nature of both Schweitzer and Shawyer, their ability to think of things differently. Create a thruster that needs no propellant and potentially violates the law of conservation of motion? Let’s give it a try! Dig up precious fossils and then immediately destroy them to learn what’s inside? Sure, you mean you haven’t done that before? Their inquisitive nature and ability to try new ideas in the face of detractors is remarkable.

In fact, Schweitzer lists the following as one of her areas of focus nowadays: “Astrobiology: Can we use the tools of molecular paleontology to detect biomarkers not only in fossils but also in extraterrestrial samples? Did life never evolve on other planets? Did it evolve and then go extinct? Or is it thriving now?” How cool is that? The worlds of dino science and outer space science converge.

Pretty soon we’ll have reborn T. rexes flying on propellant-less spaceships. Thanks to some non-standard thinkers among us.

And that’s got me blinded by new science.