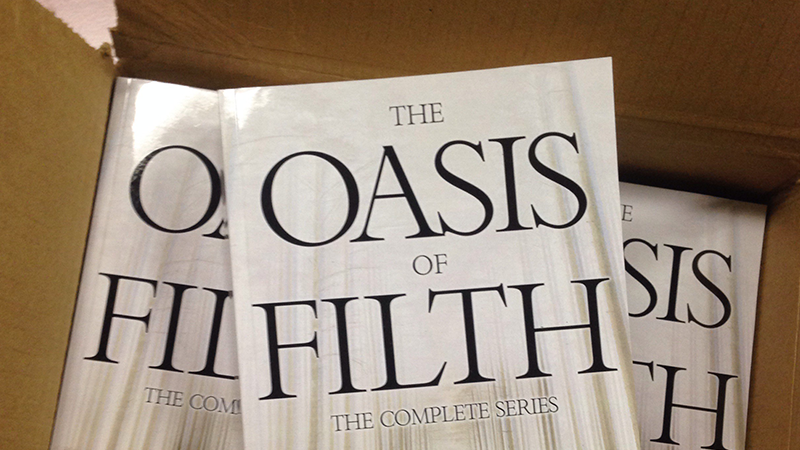 When I started writing my first novel, The Oasis of Filth, I really had no idea what I was getting into. Writing can be really enjoyable, but it takes work and planning. I carefully plotted my chapters and story arcs. And then sometimes, while writing, I’d totally change things. Or, even better — and this happened more than I expected — I would have an idea in the middle of a chapter that nicely tied to themes from previous chapters, or foretold future events. It’s been about one year since I began the book, and I have learned a lot.

For example, in writing circles, what I describe above is half “plotting” (writing the plot of your book in advance of sitting down to write the actual story), and half “pantsing” (flying by the seat of your pants while writing).

[Brief aside: The phrase “flying by the seat of your pants” apparently originated among early aviators who had very few controls or instruments and had to feel the plane to fly it, literally though the part of their body most connected to the plane, the seat of their pants. It was popularized in 1938, when Douglas “Wrong Way” Corrigan submitted a plan to fly from trans-Atlantic from New York to Ireland. That plan was rejected based possibly on fears his plane couldn’t make it, so he submitted a second plan, to fly to California instead, which was approved. After flying 29 hours, Corrigan landed in Ireland, saying his compass had failed. News reports said Corrigan got to Ireland “flying by the seat of his pants.”]

One hugely important lesson I’ve learned is that, while you absolutely can go it alone, you’re better off not.

Other indie authors will tell you that the two areas you should get help with are cover art and editing. I wrote the first part of The Oasis of Filth and published it basically unseen by the rest of the world. My earliest feedback pointed out numerous typos and inconsistencies, as well as a need to add detail, change pacing, and shore up flimsier parts of the story. I ended up doing an extensive rewrite that added about 30% to the length of the book. Then, with part two, The Hopeless Pastures, I had the good fortune of Christopher Durso’s offer to edit the manuscript. The resulting book was clearly superior to part one, so when the final volume, From Blood Reborn, came about, I asked him to edit both part one and three. The self-imposed deadline to do so was a silly thing I won’t do again, but the resulting, fully-edited novel is something of which I’m very proud. And it was infinitely improved by beta reader input and especially editing.

Cover art is a slightly different story, though. Thankfully there I have a few decades of graphic design experience, so I relied only on myself to do the art for the entire series. In fact, I relished in making the book covers very early in the writing process and using them as visual bookmarks to remind me where I was heading. I cannot say how much I loved having people ask what the covers meant, particularly for parts two and three, then hearing their reactions when they finally found out!

[Second brief aside: I will admit that now I am in a quandary: for my next novel, For I Could Lift My Finger and Black Out the Sun, I’ve already designed the cover twice and scrapped both versions. I think I know what I want it to look like, but I very well may need design help with it… alas, I digress.]

Finally, the most important thing I’ve learned is the tremendous importance of the readers. I definitely write for myself, but I firmly recognize that it will be nothing but a self-absorbed artistic exercise unless I acknowledge, respect, and respond to the readers. I read every review, including the bad ones, and try to glean what it is that each reader did and didn’t like.

And, while I’m no NYT bestseller by a very, very long shot, I can’t complain about the results so far. Thousands of people have downloaded (and hopefully even read!) my book, from all over the world (I’m looking at you, Japan). I’ve been given four- and five-star reviews by professional reviewers. And the readers have said things like this:

“I got the first book for free….that was it. I was hooked! This is not normally the genre I read but it was so well written and filled with compelling characters that I just couldn’t stop reading!”

“There is something different about the way this is written that sets it apart from what has become a crowded genre… this collection definitely stands on its own as a must read!”

“I want to thank Mr. Soares for writing such a wonderful story. This series grabbed me from the start and wouldn’t let go. When I wasn’t reading it, I was thinking about it. The characters in this story were amazing. Strong willed, funny and someone that I would have called friend.”

“After reading a variety of “undead” stories this trilogy will go down as my favorite apocalyptic tale. The quality of writing and the story line are superb. I am only sad to say that “From Blood Reborn” is the last of the series. Oh how I will miss these characters!”

“Many readers can attest to the fact that self-published authors can be kind of hit and miss, but…there are also true jewels to be found within that particular pool of writers….this author is not only talented but also has put together an excellent product…wonderful detail has gone into the “back story”, the characters themselves are extremely well developed and the plot – well now – it’s obvious that a great deal of thought & planning went into the creation of this series..”

“Wow! What writing! Again, an absorbing, taut, suspenseful story. Gripping, and human. The medical crisis turned apocalypse that started in The Oasis of Filth continues in this we’ll-written novel. A must read!”

“What really struck me about this book was the beauty of Mr. Soares’s writing.”

I have many more lessons to learn. I hope I am improving. And, more than anything, I hope I’ve got more than one story in me. Time will tell.