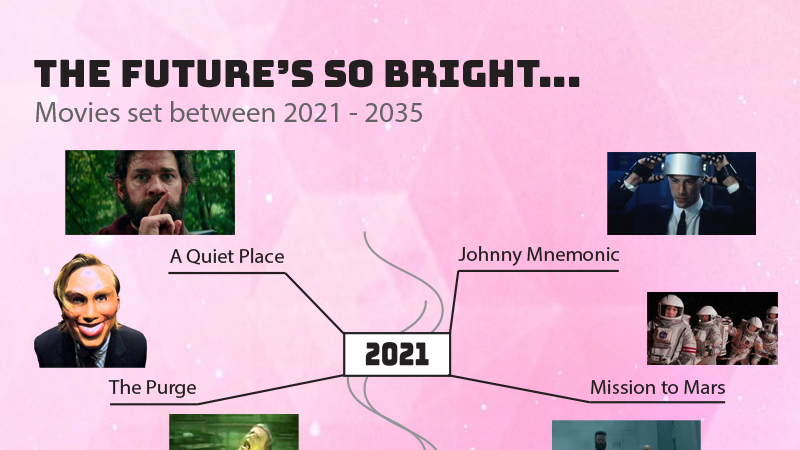 In October of 2015, I posted a graphic showing prominent sci-fi movies set in what was then the future – 2015-2029. Three years later, I reposted that, noting that we had already (apparently) lived through Back to the Future Part II, The Dark Knight Rises, The Running Man, and Rollerball. Now, with a solid segment of that old graphic no longer representing the future, I thought it was time to do it all again.

Oh, and for the record, we’ve now lived through Akira, Blade Runner, Rise of the Planet of the Apes, The Road, and Pacific Rim. Given the realities of 2020, the fact that only Pacific Rim was set in that year makes me think we would have had an easier time living through the kaiju attack. Plus, we would have had jaegers, and that would’ve been cool.

Without further ado, here is my revised chart of movies set in the next few years, The Future’s So Bright (Movies set between 2021 – 2035).

Wow. That’s a lot of new and mostly terrible options for our future. I mean, this year alone, we are expected to have The Purge (which, honestly seems like it’s already underway).

2022 was featured in Bill and Ted Face the Music, which is one of the few movies on this graphic that is generally uplifting, with a happy ending. Unfortunately, I can’t remember what part of the movie is supposed to take place this year. I hope it’s not when they go to hell.

In 2023, we get to look forward to Avengers: Endgame, but while that means Thanos is defeated, we do have the slight problem of a sudden vacuum in a major position of authority.

When we get to 2024, we can all enjoy the boyish antics of our beloved Spider-Man, but four years later, we plummet into The Cloverfield Paradox and then there are multiple Earths and frankly bad things go down all around.

We take a 2 year breather before laboring through the final days of Logan, only 1 year before we all have to get on a train and constantly circle the globe due to a climate disaster. Of all the movies on this graphic, Snowpiercer may be the most ludicrous one. I’m kinda shocked they opted to make it into an ongoing TV series, given that it seemed to be a pretty implausible concept for only a 2 hour film.

What would you like to see happen in 2035? Take your pick:

Select carefully. We’re all counting on you.