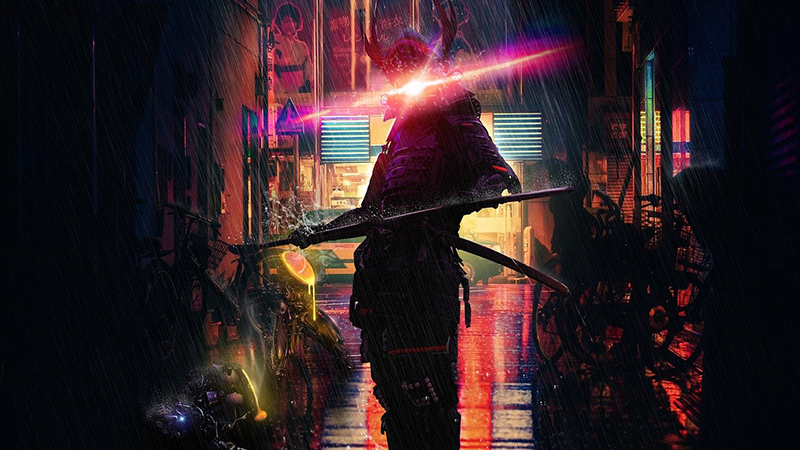 Standing high on the fortress wall above my opponent, I deflected his bullet as easily as a thousand before, yet in that moment I knew something had forever changed. As the projectile ricocheted off my blade, it crackled apart, each individual piece emitting a faint, high-pitched drone. I knew the sound despite the unexpected source, and I knew it meant death.

Deliberately I drew a breath, estimating my life had no more than two breaths to go. I tried to think what to do, but a man cannot outrun fate. Life had shown me much.

Summoning the strength of my line, 600 years of Sho-ja, I went into a meditative trance, waiting.

Sho-ja Nonen, Pinnacle of the Pyramid, father of my forefathers, was the first. He didn’t invent the nanosword, but he became its supreme master, wielding it in a way that no other could match. At the height of the War for the Nhin Lands, when Maru and the Hol-nari – marshals of the air – descended upon him, Nonen’s nanosword whirled faster than light, destroying all who faced him. It crackled apart with each blow, then reformed, ready to slay again, until Nonen found himself surrounded by thirteen Hol-nari warriors. In desperation, he splintered his nanosword to deliver death simultaneously, a technique later called doli-ki-wobokai – The Death of the Thirteen. No man had ever seen its equal, and, though it killed his foes, it left Nonen exposed. Maru saw his opening and dove from the sky, but Nonen willed his sword back together at the last moment. The weight of Maru’s own winged steed impaled him upon Nonen’s blade. Victorious, Sho-ja Nonen became the first ka-liph.

Over the years of Sho-ja rule, our enemies tried to break the ka-lipha to no avail, for the nanosword – thousands of deadly particles controlled by the hilt of a sword, forming a blade, breaking apart, and forming again, endlessly – was given not only to the ruling few but to every soldier in the Sho-ja army. Certainly no commoner matched Nonen’s skill – he was the Pinnacle of the Pyramid – but a thousand nanoswordsmen of average ability could defeat any opposing force.

In time, peace grew, and Nonen ruled by word rather than deed. He begat twins: son Jiku and daughter Loren-wo, who became Grand Masters, the Second and Third Stones of the Pyramid.

Generations of Sho-ja came and went, filling the Pyramid with their revered names. Nanosword masters like Cantu, Hi-ko, and Newa-vuku. Each was ranked for their skill with the blade, yet none surpassed the trio at the top.

As the centuries passed, my family survived countless attempts to end our rule, both from within and from foreign invaders. In the Later Years, ships came, bearing new technologies like the rifle and pistol. But mere bullets were no match for a nanosword properly wielded.

Forty-nine Sho-ja, my forefathers and mothers, made up the Pyramid by the day I was born, yet only those first three were sacred Grand Masters, as dictated by our lore.

Until I was tested.

After disease took my father, my mother ruled the Nhin Lands – and raised me – alone. Certainly we had servants, more than I could ever count. But to learn the nanosword, learn to love the high-pitched drone of its deadly particles? To learn to rule? Those things my mother taught me.

At my test, the elders fell silent. They consulted their scrolls and conferred in whispers. An argument broke out, and my mother interceded. When order was restored, I was given my place – Seventh Stone of the Pyramid – to gasps from the assembled elite. No Sho-ja had ranked higher than Twentieth in a hundred years, yet I was enraged. It should have brought me great joy and unending pride to see my name – Sho-ja Kelen – placed in such a lofty position, but I was too young to understand my folly, that the world does not change gently.

I knew I had excelled at the standard moves and dazzled in free battle. No living soul was my equal, but I desired to best those who were not living – the Grand Masters. I attempted the doli-ki-wobokai – The Death of the Thirteen – and, to the astonishment of all, I succeeded. In history, only Nonen and I had ever done such a thing. Though I didn’t wish to supplant the Pinnacle himself, in my hubris I expected Second Stone; the first Grand Master in almost 600 years. I was denied.

Many years later, on her deathbed, my mother gave me wise council. “Kelen, you cannot alter history without a cost,” she said. “If you teach the world the Grand Masters can be beaten, you take away their divinity. And if you do that, the world will learn that you, too, can be beaten.”

Above my head, I heard the nanoparticles of the bullet circle, preparing to loop down upon me, a thousand strong. I couldn’t possibly deflect so many with my blade. The Death of the Thirteen happened only twice in a millennium. I wouldn’t discover a Deflection of the Thousand before I drew my final breath.

Breaking from my trance, I studied the moment, the last things this life would give to me. I blinked at the setting sun telling me my days were ending, and smelled the brine of the nearby sea. I felt the chill of the evening air on my cheeks, and the familiar texture of leather on the hilt of my sword. I listened to the whir of the particles shepherding in my demise.

This new and deadly swarm fell toward me, something I’d never seen before – a nanobullet. Far below, my opponent smiled. Yet I still held the sword passed down to me from my mother, and knew one thing: the world does not change gently. If this was the end of the Sho-ja, then I would make it worthy of my line. I echoed the smile of my opponent, placing one foot upon the ledge directly above him, and his grin faded. As death rained down, I knew it was time to see if Sho-ja Kelen truly deserved the title Grand Master.