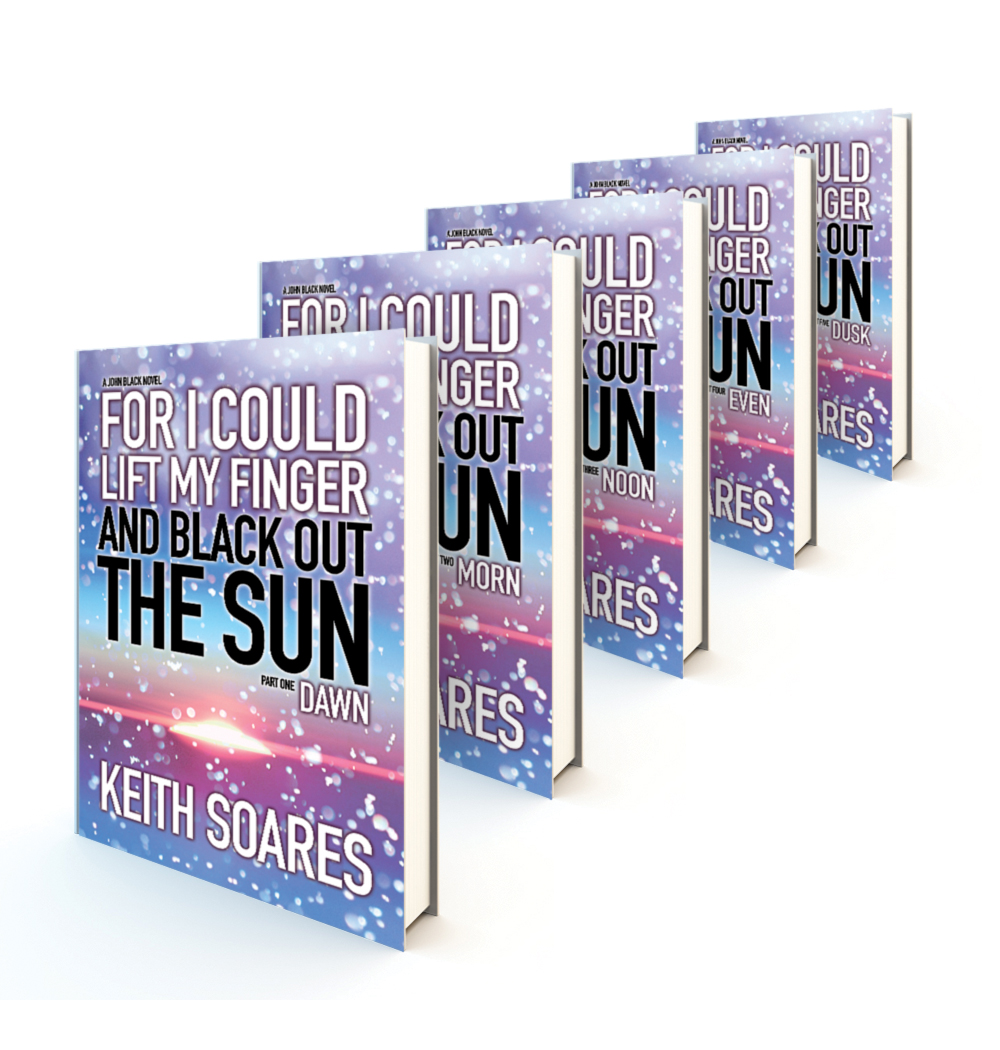 Tomorrow, the fifth and final installment of For I Could Lift My Finger and Black Out the Sun arrives. It’s do-or-die time for John Black and the guy who calls himself Sol.

So why is this so exciting for me? Because this time, it’s for real. When I wrote the first part of The Oasis of Filth, I was just testing the waters, even fooling around if you will. I didn’t expect many people would read it or care (I was off by a little – since the first book launched, the three parts of the series have been downloaded by nearly 30,000 readers!). I love the Oasis books and I’m very proud of them, but one thing they are not is funny. They’re gritty, post-apocalyptic tales where bad things happen, a lot. The main character is in his sixties, and given all the crap he has to deal with, there isn’t much time for jokes.

But not John Black. John is a kid, just barely a teenager by the end of the book. He’s sarcastic and self-deprecating. He and his friends mouth off. In fact, the opening line of the book is “Walter Ivory was a son of a bitch.” The book is classified as Young Adult Science Fiction, but I wonder how many parents are going to check out that opener and say No Way.

If it’s true that writers insert themselves (consciously or not) into their work, the main character of Oasis might be some fictitious future projection of me, but John is me from years past. His unnamed home town is based quite a bit on Crofton, Maryland, where I grew up. The road where John is hit with a car is an awful lot like Davidsonville Road. The place Walter Ivory robs could easily be the 7-11 or even the old High’s on that same road. The downtown area of shops is like Village Green. Sure, they’re not exactly the same, but if you know the area, you see the roots. And John is a nerdy, sarcastic kid with nerdy sarcastic friends. Sounds familiar.

Of course, I didn’t have the good fortune (bad luck?) to gain superpowers, but you know I have to use my imagination for something. Otherwise it’s a documentary.

And now with the final part, I look forward to your feedback. I think John Black has a good story to tell. I hope you feel the same. One way or another, he has to deal with Sol, a guy who could be a friend but doesn’t act like it. And then there’s Bobby, a guy who definitely is (or was) John’s friend, but doesn’t act like it, either. Things are messy. Time to clean house.