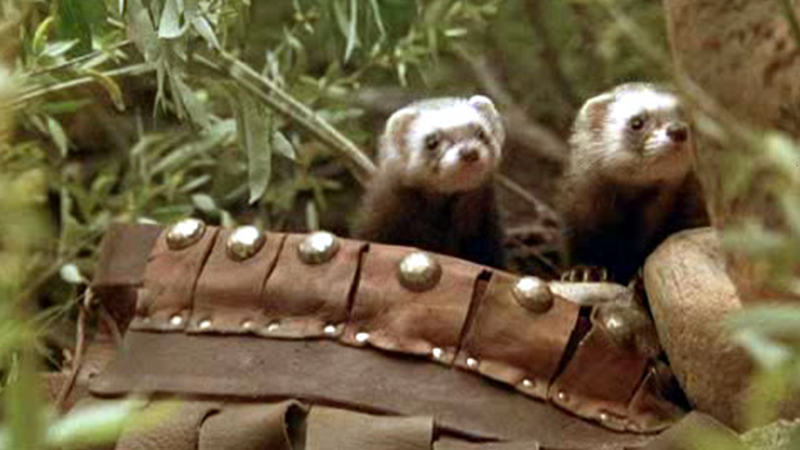 A friend and prominent early reviewer of my writing, “Jeff” (real name, Jeff), has just commented on my capabilities at ruining movies.

Which is probably why I tried to write as realistic (AS POSSIBLE) a zombie novel. Yes, writing a zombie novel is unrealistic. That’s unavoidable. But I tried to make it plausible (and several reviewers have pointed that out as a benefit). But others have been unimpressed.

Opinions come free. Everyone has one. There is no discounting the opinion of someone who hates, or at least seriously disapproves of, one of my books.

So Jeff was reminded of our teenage days, many moons prior, where we would sit and watch bad 80s fantasy and sci fi films and I would rip them apart. Mostly it was over special effects that were as far from realistic as possible. One title, The Beastmaster, was highlighted. I couldn’t help myself. In some scenes, they literally DRAGGED the ferrets across the ground using string or wire. In another, a dog dragged a man, but even when the dog stopped and opened its mouth to readjust its grip, the man kept sliding along the ground. Fast cuts, but no retouching. With the advent of the VCR, we could pause these scenes and see the mistakes. But honestly, they were so blatant, I got the impression that either the filmmakers kept them in as a joke, or were so supremely jaded that they just didn’t care.

And I have continued to be the couch reviewer of plausibility, much to my wife’s chagrin. In the George Clooney-led Batman & Robin, I was aghast at the idea that reflecting sunlight could warm and melt frozen objects. I understand that they tried, lamely, to introduce a sort of focus on the beam, like using a magnifying glass on an ant, but it felt a whole lot more like using a mirror on a fireplace. You see the light, but there is no warmth. I think Gotham would have been a very bright, but still very frozen place.

More recently, take Gravity. It was a thrilling roller coaster ride of a movie, visually very pretty, too. I really did enjoy it. But plausible? Well, I imagine the very first bad thing that happened to Sandra Bullock might have had a 0.00001% chance of survival. It gets more far-fetched from there.

With Oasis of Filth, I have spent a lot of time on the idea of realism, for what it’s worth. But those who would discount my version of reality are right. My books, while attempting to be true-ish, are fiction. They probably couldn’t have found those supplies there. It probably would have taken less/more time for that to happen. I’m probably way off.

But that’s the story, folks. It either works or it doesn’t, and I stand by it. Sure, I don’t want my inconsistencies to take you out of the story, so I will continue to work to improve those in future books. But in the end, my main focus is about how it made you feel, what you took out of it.

What has been will be again,
what has been done will be done again;
there is nothing new under the sun.