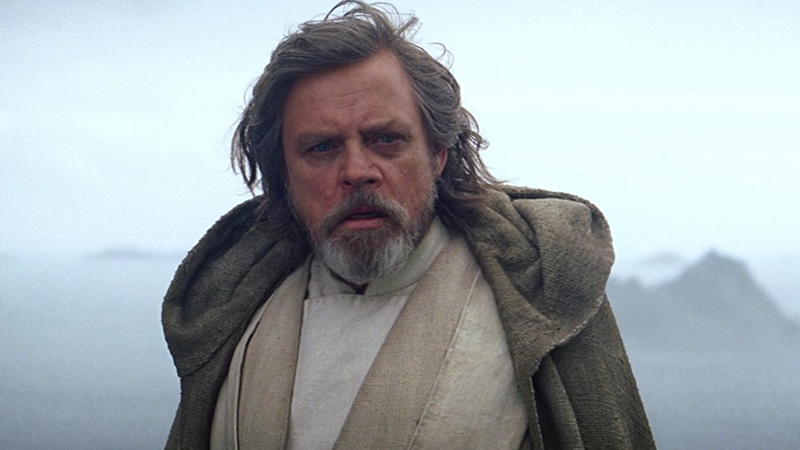 Spolier alert: If you came to read a blog post about The Last Jedi this many months after it came out, still don’t know what happened in the movie, and don’t want me to spoil it for you, you’re a complex riddle of a human that I simply can’t understand. If, by chance, that’s you, here’s your warning… spoilers ahead. I feel silly even writing it.

I’ve had time now to think about Star Wars: The Last Jedi, and dammit, the movie was good. Much, much better than Rogue One, and less directly derivate than The Force Awakens. Okay, okay, the part where Finn and Rose went to the casino was clunky and weird, and Benicio Del Toro felt like he had been physically stapled to the film in haste, but the main story – the story of Luke Skywalker’s final days and how a young Jedi prospect named Rey affects the outcome of his life – that part was really nicely done.

Naysayers – including at one point Mark Hamill himself – will tell you that Jedi don’t give up, and that Luke’s voluntary exile is not consistent with his character. Why? Did becoming a Jedi make Luke inhuman? Can he not make mistakes and basically waste a portion of his life before he realizes those mistakes? How does joining the Jedi Order make Luke incapable of failure? It certainly didn’t make any number of other Jedi fail-proof (at this point you can literally insert any other Jedi from the entire set of movies and probably every book, and find that Jedi are far from fail-proof; “I’ve failed you,” is practically the Jedi rallying cry). But more than all that, I’m surprised that Luke’s story arc even struck people as all that dissimilar from what has gone before. Obi Wan Kenobi failed when training a powerful apprentice, and as a result, hid himself away on a remote planet for years until he was dragged back into the fight. Yes, I know that he hid himself on the same planet as Luke, so he probably gets a pass, but why wasn’t Obi Wan busy fighting the baddies, rather than just waiting for something to happen? And then, once he was back, he dies pretty quickly in a sacrifice to save others. Sounds familiar.

But sure, Luke is brusque and irreverent in large sections of The Last Jedi. That’s not like him, I guess, to some. Again, why? Luke was a whiny kid, self-centered enough to want to see the galaxy simply for his own benefit. He found out he was special by accident, and even when told he absolutely must be trained for the common good, he took off and did what he wanted. Sure, at the end of Return of the Jedi, he seems like a thoughtful, sensible Jedi, but the old Luke was still in there. The whiny, me-me-me kid. The one who could have succumbed to the dark side like his dad. How did 15 minutes of stoic Luke replace 2+ movie of headstrong Luke?

I don’t think anyone has a problem with Luke Skywalker starting a school – that seems logical, what he was supposed to do. But it also seems like the kind of thing that might go to your head, particularly if you were the only one calling the shots and everyone (in the universe??) looked up to you as their Jedi Master. In the olden days, they had a council where they had to decide and agree upon things. Luke was autonomous. So when his pupil Ben Solo was showing real signs of turning, what did he do? He made a momentary mistake, in his hubris. That doesn’t seem all that impossible. But it’s a big mistake, and it results in a lot of people dying and a pupil who turns into the new face of evil. Why would Luke go into exile? Maybe because he couldn’t trust himself. Maybe because he needed to try to get back to being that thoughtful, sensible Jedi – the guy who’s easy to be when things are going well, harder to be in other times.

What I really like about The Last Jedi was that Rian Johnson – love him or hate him, though I personally think that if you hate him you should have just made your own movie with Star Wars figurines and stopped there – thought long and hard about the characters. When Luke asks, “Where’s Han?” you could easily think to yourself, “Wait, how could he not know? This is the guy who left Yoda’s training when his friends were simply in trouble. How could he not know Han is dead?” And then, later, you realize what Rey realizes – that Luke cut himself off from the Force. Intentionally. Because he doesn’t trust himself with it anymore. That’s shows Johnson was thinking about this stuff. A lot. And I like it, appreciate it, and commend him for it.

Okay, then, what about Luke’s death? I’m going to duck out of Star Wars nerddom for a millisecond and dive into the larger pool of general sci-fi nerddom. When I was a kid, my two heros were Luke Skywalker and… Captain James T. Kirk. You want to be pissed at how a beloved character dies, a character you’ve watched for years and revere? Watch the abomination that is Star Trek Generations. Sure, Kirk dies quasi-saving the universe or something, but the plot is so messy and the villain so boring, that I’m not even totally sure. It was just the saddest of endings. “Oh my!” That’s all Kirk got to say. But Luke? He uses his power to project himself across the galaxy, taking long enough to have a last moment with his sister before stepping out and confronting the entirety of the Empire (sure, I can call them the First Order, if you like; it doesn’t sound as cool and it amounts to the same thing). When Kylo Ren pummels Luke with blaster shots and then Luke simply brushes those away? I got a little misty-eyed, I admit. Then came the lightsaber battle, and, thank heavens, it wasn’t some overblown series of spins and flips and ludicrous moves that you simply know none of the actors (or characters) could pull off. Even if modern technology can paste the face of our hero onto the human-like form of a CGI swordfighter, I just can’t buy into a lot of the moves they make in most films. But this duel is simple – just a few back and forth attacks and reactions. That was excellent.

Here again, I think some fans were put off because something seemed strange. Luke looks… odd. Why aren’t they really fighting? What’s going on? But to me, that’s what made it cool. Realizing that Luke wasn’t really there, and had duped his hothead nephew to save the resistance – that was exceptional.

So when Luke faded into the Force at the end of the movie, it seemed right. Think about Obi Wan Kenobi’s death, particularly if you’re old-school like me and watched the movies in their original order. Luke’s death was infinitely more dramatic and poignant than Obi Wan’s. (And, if you’re younger and first watched the films in their numeric order, you should be even more pissed that Obi Wan – a character you grew up with for 4 films – died so suddenly.)

So much of The Last Jedi was about perception. Is your perception truth or fiction? That depends on a lot of things, including the very moment you’re living in. Until his death, Snoke is certain his perceptions are true. Kylo Ren makes a similar mistake at the end of the film. But, more importantly, Luke Skywalker’s perceptions prove wrong as well. He thinks he can cut himself off from the Force and thereby eliminate the cycle of death and struggle that has tainted them for eons. He’s wrong.

And that’s why he has to expend the last of his energies to correct his mistake.

Or maybe I have no idea what I’m talking about, and like Luke, you think, “Amazing. Every word of what you just said was wrong.”