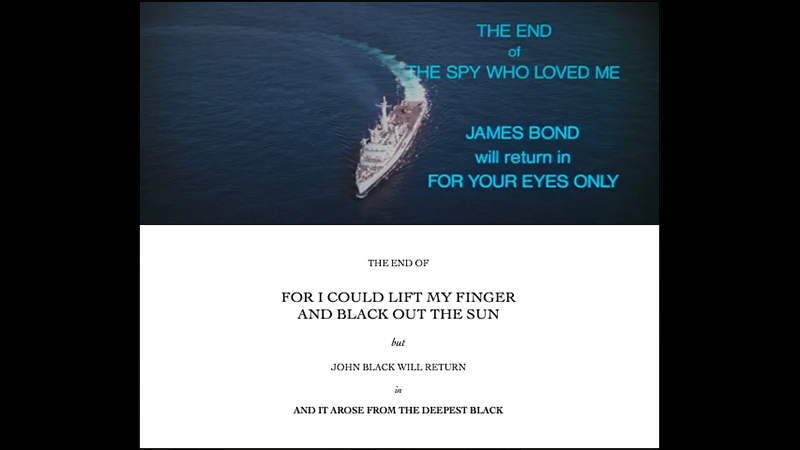 Most authors – actually, probably all authors – embed things in their work strictly for their own enjoyment. I’m of course no exception. Today, the trailer for the latest James Bond movie came out, and, frankly, I’m ready to watch it RIGHT. NOW.

Thankfully, I have the last Skywalker Star Wars movie coming up soon (tickets already purchased!) to help bridge the gap until April of next year when Bond comes out.

Daniel Craig has been my favorite Bond, based mostly upon his first movie, Casino Royale, which I think is the best Bond movie of all time. (Connery is my second favorite, and yes, I understand that’s sacrilege.) Unfortunately, or perhaps fortunately, Craig’s track record as Bond as been distinct: good movie followed by bad. While Casino Royale was fantastic, A Quantum of Solace was… lame. Then came Skyfall which was quite good, so of course they followed up with Spectre, and it was a dud. [Side note to the producers and directors: If something trivial sets off a massive series of explosions that essentially cripples the bad guy’s enterprise, your movie is a dud.]

Now, we get No Time to Die, which may be the most traditional Bond movie name of the lot (yes, I know Casino Royale is an actual Ian Fleming novel – it’s on the bookshelf to my right as I type this). But since it is coming AFTER a dud, it HAS to be good, right? Let’s say yes.

In any event, seeing the new trailer made me think of my own Bond references in my John Black series. The most blatant is the end of each novel, as seen in the image above – “The end of (this movie/book) but J.B. will return in (that movie/book).” Just insert the proper titles and either John Black or James Bond, as necessary.

So I decided to make a little list of all the pop culture references I sprinkled into the John Black series. It’s more than I realized, once I really thought about it. Here’s the list:

All the Pop Culture References in the John Black Series

There you have it – all 40 pop culture references in the series. I also gave a nod to my own previous novel, The Oasis of Filth, and my short story, “Pale Remnant.” I won’t be so bold as to call those “pop culture” references, though.

I’m not saying all these references are overt – you may catch some or possibly none. But, to me, adding all this into the story makes it that much more enjoyable. Oh, and John Black’s hometown is of course my childhood hometown of Crofton, Maryland. The escapades of John and Bobby biking in town are loosely based on my own slightly less death-defying moments. And the scenes at the beach in the series are 100% Ocean City, Maryland, right down to the rickety roller coaster that I’m still sure will collapse and kill people at any time.