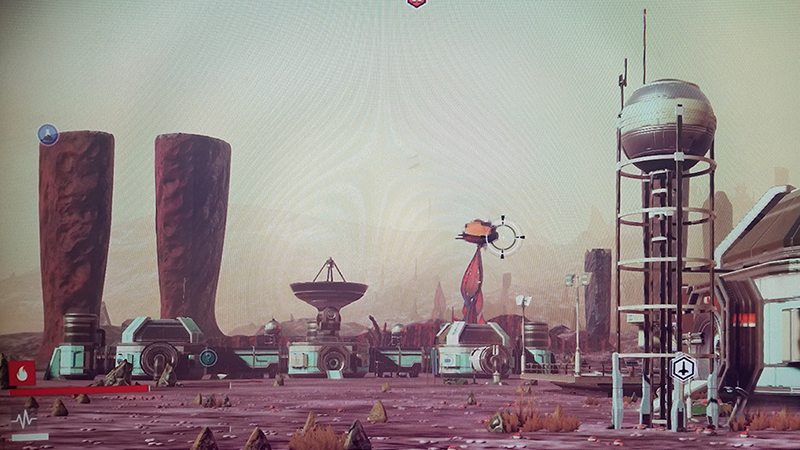 I don’t think I’ve written about this before, but I am a bit of a video game aficionado. Aficionado is a Spanish word that means obsessive nerd.

I don’t always play video games — sometimes months go by without me picking up a controller — but recently I’ve been playing No Man’s Sky. This is fairly off-center for me. My normal go-to video game is a narrative adventure, like Uncharted 4: A Thief’s End, which was, by the way, really great. No Man’s Sky is more of an open-ended exploration in first-person, sometimes peppered with laser battles. #pewpew

The (hyphenated) word that gives me the most trouble in the above statement is open-ended. I’m not much for games where you have invest an incredible amount of time just to amass enough [coins/hit points/magic spells/ammo/credits/dollars/gems/stars/smurfberries] to actually do something. I’ll be blunt: I’m not 14. I don’t have much in the way of free time. I need my video games to entertain me for the brief bits of time when I’m actually able to play them, ideally in rather small and digestible chunks and absolutely not requiring me to do the same thing over and over. I hate doing things over and over.

If I play a video game and get stuck on a level, it gets maybe 3 tries from me before I call on Mr. Google. Walkthroughs are my friend. I don’t have 6 hours to find the [magic skull/sword of exultation/rainbow jeep/unicorn t-rex/time travel diamond/glass slipper shotgun]*. If I give it the ol’ college try a few times and fail, then I’m just going to look up the solution. Left, right, down the hall, be sure to take the discarded kilt. Then beat the baddie (how? also in the walkthrough), and voila! Done. So much more appealing to me.

I wish life had a walkthrough.

So, in No Man’s Sky, the completely overwhelming size, scope, and unscripted nature of it all was not necessarily a good thing, for me. The game, in which entire solar systems are procedurally generated, consists of an estimated 18 quintillion stars (each with multiple planets) and would take more than 5 billion years to explore. (Other estimates put it at more than 5 hundred billion years.)

Still, I got the game and fired it up. I walked around. I saw creatures. I quickly used up important resources. I found more. I ran out again. Then I fixed my ship and headed for the stars… only to land on another planet and essentially do the same thing: forage.

But on or about my fifth planet — out of that possible 18 quintillion, mind you — I ended up finding a bit of luck. I discovered the place was littered with things called Vortex Cubes. Then I noted that a sister planet in the same star system also had the cubes (though red, not green). And finally, I found Albumen Pearls. Maybe they have another purpose I’m not aware of, but for me, they’re a cash cow.

Strangely, given my general hatred to spend a ton of time on something or to redo things, I’m actually pleased to harvest Albumen Pearls over and over to make money. I plan to get a nice big new starship soon. And some Atlas Stones. And then I’ll take a jaunt to the center of the universe.

What cracks me up about all this is the supposed controversy. Some people are really mad that Vortex Cubes (and Albumen Pearls, and some other expensive stuff) exist at all. Like it’s ruining the game to have these accidental discoveries that can drastically change your financial situation. Seems an awful lot like life to me, though.

And some people are angry with the developer that the game is not actually infinite. (I have news, naysayers: none of you will ever live to be anywhere near 5 billion years old, so in reality, the game is much more than infinite, to your tiny mortal being.) No Man’s Sky is clearly the most expansive commercial video game experience in history. Maybe cut that some slack. I also think it’s great that there are published guides to the game. Why? Let’s say each guide is 300 pages long, and each page covers a single star system. The guides would, of course, still fail to cover essentially the entire game. (For you math fans, 300 described star systems divided by 18,446,744,073,709,551,616 possible systems equals ERROR, YOU FAIL.)

So the shear vastness of No Man’s Sky makes a true walkthrough pretty impossible. For me, if there weren’t Vortex Cubes or Albumen Pearls, I’d probably get tired of the game soon. Trudging around a universe filled with so many planets I will literally never see them all, all while trying to find this or that to build a better starship or acquire the next Atlas Stone… well, that just seems too much like real life. Scrounge, acquire, use, repeat. Infinite options, infinite complexity, no walkthough. Screw that.

*Note to self: I need to write a story that contains one or more of the following: [magic skull/sword of exultation/rainbow jeep/unicorn t-rex/time travel diamond/glass slipper shotgun]