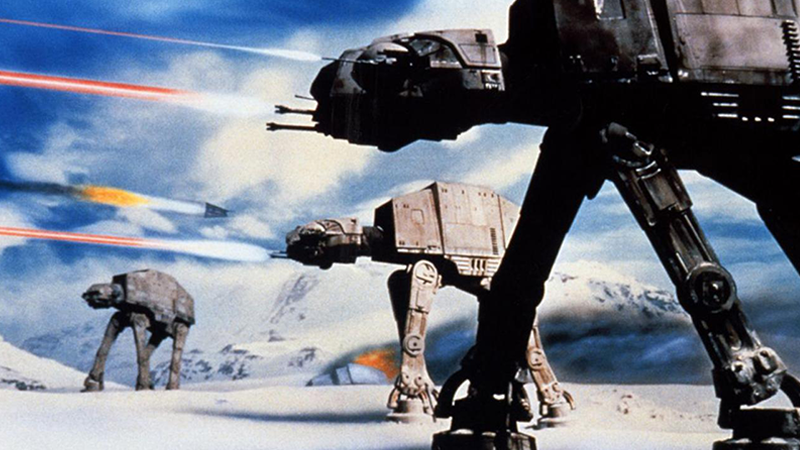 Update 2016.04.07: With the release of the new trailer for Rogue One: A Star Wars Story, AT-ATs are all the rage again. Who knew? So now is an even more appropriate time to analyze their true value to the Empire…

If you’re like me, you spend way more time thinking about inane things in a logical way than is healthy or sane. This is necessary in writing fiction, because despite that name (fiction: (noun) something feigned, invented, or imagined; a made-up story), people generally expect their fiction to be plausible. That is to say, sort of like fact, but we’ll give you some wiggle room. And I’m one of those people, trust me. That’s why my story, The Oasis of Filth, deals with “zombies” that are very much not undead creatures, they’re simply people with a strange combination of leprosy and rabies, both of which are very real things. So I combined two facts to make a plausible fiction.

I guess that’s the basis of why something like an AT-AT, while generally very cool looking and fun to watch, makes absolutely no sense.

On a fundamental level, can you explain to me why the Empire dropped these giant, walking vehicles down on a planet many miles from their destination, and then had those vehicles laboriously walk to where they really needed to go? I know, there’s some business about shield generators, but seriously? They have faster than light travel and you’re saying they couldn’t come up with something better than a glorified, oversized horse? And it’s not just me. Popular Mechanics has a nice little article dissing the AT-AT, as well as some other weapons in Star Wars, including the notion of blasters themselves.

Also, it’s “At – At” and not “Ay Tee Ay Tee.” Anyone who tells you otherwise is not to be trusted.

What’s wrong with the design of an AT-AT? Pretty much everything. I mean, perhaps it is useful in transporting troops from point A to point B, but it certainly isn’t getting any medals for doing so quickly, secretly, easily, safely, or with any guarantee of success.

Why? Let’s look at each failure individually.

The AT-AT is cumbersome and slow. Watch that scene where Luke is trying to extract himself from his downed speeder. He has plenty of time — despite the tense music — to make his escape. If he wasn’t trying to also extract his dead gunner, Luke would probably have been comfortably at a distance when the AT-AT finally waddled up.

Plus, there’s the four-legs thing. I mean, there are four-legs and there are four-legs, amiright? If the AT-AT used its four legs like a cheetah, perhaps it would be fast (although I doubt the ride would be all that comfortable for troops inside — bring your barf bags, folks!). But AT-ATs walk more like plodding yaks. And the only other time I can think of someone using a plodding yak for transport would be — you guessed it — the sand people in Star Wars.

Do I even need to write anything here? AT-ATs are reportedly 22.5 meters tall, which in archaic US notation is nearly 74 feet. In an even more bizarre translation, that’s about the height of a seven-story building.

Hapless infantryman A: “Do you see anything coming?”

Hapless infantryman B: “You mean behind the walking seven-story buildings with guns?”

Hapless infantryman A: “We’re on a deserted planet. Why are there walking seven-story buildings with guns?”

[Blaster fire kills them both.]

Also, have you heard how loud those things are? Even Beethoven asked the AT-ATs to pipe down.

Maybe they are super easy to use. I’m just guessing here, but it seems to me that a bunch of soldiers climbing a ladder to get into a 22.5-meter-tall transport would not be the most efficient or simple way to get troops places.

Or maybe they have a hovercraft that can levitate the troops en masse, up to the height of the AT-AT, where they simply open a hatch and walk in?

Come to think of it, if they have such a hovercraft, why don’t they just stay in that and fly it to their destination instead? Sorry, I digress.

There are so many issues with safety, where do I start? The second A in AT-AT stands for “Armored,” and supposedly it is armored to protect troops inside. [By the way, have you ever pictured what the troops are doing inside? Are they just standing around, being shaken left and right as the thing walks, bored to tears? Like it’s Star Wars day on the Metro?]

But the armor sucks. Sure, Luke can slice it open with one swipe of his lightsaber. Fine – that’s a lightsaber, so we’ll give it the benefit of the doubt. But then he throws in a tiny grenade and blows up the whole vehicle.

And there’s the whole “tripping” sequence where Luke and (the dead guy) wrap a wire around the legs of an AT-AT to trip it up and bring it down. When it’s “face” touches the ground, the thing completely explodes. Why? I think OSHA is going to want to look into that design flaw.

Not to mention the simple liability issue of having to have all your troops climb a big ladder up to the transport, all while wearing slick white plastic shoes.

I Guarantee This Will Work ™ *

* This is not a guarantee.

Given all the other flaws, who in the Empire rubber-stamped this thing? Darth Vader was known to Force-choke people for significantly lesser offenses. I certainly hope the paper-pusher in charge of AT-AT Design and Production died with invisible fingers wrapped around his neck.

In the end, the main point of the AT-ATs was not to transport troops — that seems completely superfluous. It was instead to get some sort of large gun close enough to the shield generators to take them out. And it did, so, you know, way to go, guys! Still, couldn’t you have done that a lot faster with some comparably-sized flying vehicle?

But that’s no fun. The scene would be over in around 30 seconds. The rebels would still lose, but probably a lot more of them would be trapped and killed. So, from the Rebellion, I say thank you, Empire. Without your flawed technology decisions, our jobs would be a lot harder.

Oh and thanks for completely ignoring SPOF (Single Point of Failure) considerations when designing the Death Star, Death Star II, and Starkiller Base.