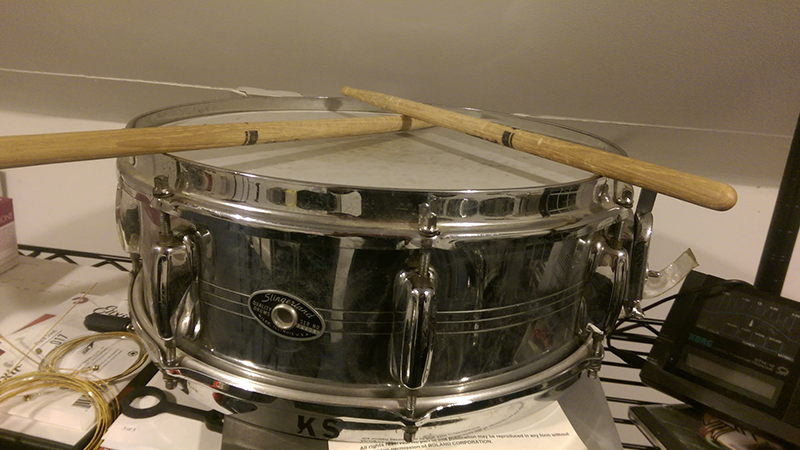 I grew up in a family that would listen to music, but generally had no musical background. If you asked my family what instrument we played, the answer was ‘the stereo.’ To my knowledge, there were no guitar players or singers or pianists in previous generations (at least not close enough that I know about them). Still, somehow at around age 10, I developed a desire to play the drums.

Well, I take it back. I know exactly how it happened. Part hero worship, part peer pressure (or at least the desire to go with the crowd). My friends and I were listening to KISS a lot back then in the mid- to late-70s, and although there were no readily-available electric guitar lessons, we could get drum lessons. All we had to do was join the school band. So some of us did, as a sort of impromptu pact. And a desire to be like Peter Criss from KISS.

My parents were kind enough to indulge the whole thing, first renting then buying me a Slingerland snare drum some time around 1978 (which I still have today, as seen in the image above). Two sticks, the snare, a stand, and a bit of rudimentary sheet music. And a whole lotta noise. I can’t imagine the beginnings were very enjoyable for my folks or sister — me ratatatting away on a snare to music only I could see on a paper in front of me, or worse, in my head. Things may have gotten marginally better when I started playing along to my KISS records, but I doubt it.

After it became clear I wasn’t going to stop making all this noise, I was successfully able to beg for a full drum kit (I believe it was because boom-tat-boomboom-tat is noticeably more enjoyable than tat-tat-tattat-tat). The first kit was, of course, small and came used, a pearl-colored Ludwig set. Four piece, one cymbal, a hi-hat, and a ride. By that time, I was pretty into Rush and Neil Peart’s mega-drumset, which meant that when I finally started working part-time jobs, approximately 98.57% of my earnings would go toward buying something to enhance the kit. Roto-toms (I know, I know), additional cymbals, a wood block, tambourine. Even a deep blue ride cymbal (having good sense about what to add came later, folks).

Armed with a drum kit, I began jamming with friends, and eventually congealed things into a band or two. My musical likes expanded from KISS into classic rock, alt rock, new wave, and, for a long silly period that might even end some day soon, hair bands.

I’ve been to countless concerts, some of which I was absolutely dying to go to at the time, though now I have no idea why. So I’ve come to appreciate that a special concert is truly, um, special.

Last summer, my wife and I saw Paul McCartney at Nationals Park in DC. It was something I swore I had to do for years. I love the Beatles and Wings, and though I respect and enjoy Lennon’s music, McCartney is the one I really liked. The show was great, a living legend who still’s got it.

We’ve also seen Prince a couple of times, including one tiny show in Las Vegas where we grooved to ‘Purple Rain’ just feet away from where he wailed on the guitar. I’ve seen Rush countless times. And I missed seeing the Kate Bush return performance this year in England by the slimmest of margins (i.e. the ticket I did not possess). I remember not wanting to see Bruce Springsteen at the Amnesty International festival-style show many years ago, yet still loving his pounding, energy-filled show. I’ve seen REM, U2, Pink Floyd several times though without Roger Waters. I begged off seeing Michael Jackson one time; that was a mistake. Haven’t see the Police, but I’ve seen Sting twice. I haven’t seen Elton John in concert, but my wife did from the first row, and by rule of marriage, we are one person, so that counts. haha

Even random encounters are memorable. Once on a flight to Florida, we saw a guy carrying a guitar case that was emblazoned with the scripty words “Bo Diddley.” I turned to my wife and said, “That is definitely not Bo Diddley.” It was. He sat a few rows ahead of us.

So, this weekend, the pursuit of legends continues, as we go to see Stevie Wonder perform ‘Songs in the Key of Life.’ Which is appropriate, since his songs, like those of the others I’ve noted, are the music of my life. In fact, his song ‘Living for the City’ is forever associated with our trip to Paris, where we fought tourists, the cold, and most importantly the rain and wind, to do some sight-seeing at Notre Dame (“All that just to get / to the Île / de la Cité”).

In looking over Rolling Stone magazine’s list of the 100 Greatest Artists, Paul McCartney and the Beatles are #1, Stevie Wonder is #15, that guy we were randomly on a flight with, Bo Diddley, is #20. U2 is #22, Springsteen is #23, and Prince is #27. REM, Elton, and Sting are on the list somewhere, too. Not bad.

When Stevie takes the stage Sunday, maybe Sir Paul will join him for a little ‘Ebony and Ivory.’

I volunteer to play the drums.